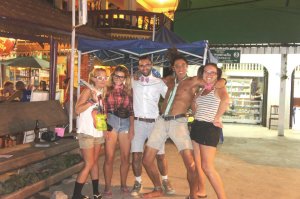 What a bunch of wreck-heads we were.

I remember an ex-British-military man turned backpacker-wreckhead reciting a poem the soldiers used to say amongst themselves in honour of a fallen soldier.

At the setting of the sun,
and in the morning when they ask of us,
we shall tell them:
“He gave his tomorrow so we could have our today.”

The selflessness is with me at the moment because everywhere I look it’s all I see. ‘Here have this’, ‘here take that’, ‘oh how can I help.’ .. It’s not a terrible problem to have.

The fact is that after that fateful Vang Vieng stay, the tuk-tuk pulled away, I left the fervor, put fire away, and cleaned my act up. I tried my hand at med-school, and then being a celibate monk in Sydney, and eventually settled on business – with relatively great success. Things were looking up.

4 weeks ago, I was fired from that business. My own business. In one day I lost my mentor, my business-partner, and my income. The next day my girlfriend at the time left me. The day after I was sacked as a coach on a self-improvement course through which I had set up my Children’s not-for-profit NotOneMoreChild (notonemorechild.com.au). Two days after that I was kicked out of home. Now I’m not pointing fingers and I have no one to blame but myself. It was a bad week. But luckily, I have a talent for getting on with it. This blog exists to chronicle the bounce-back. And I’m excited to tell you that it’s been a good month.

To all those, that when called upon, were at my doorstep. To those who remembered who’s wallet was open to them before, and who opened theirs for a meal. To those who’s homes were made my own. To those that shook my hand and struck a deal on a gut-instinct alone – this post is for you. But what’s more – this come up is for you. I don’t have ‘loyalty’ tattooed on my knuckles for nothing. From the soaring heights, I long to look back down with you all and barely be able to make out the details. On with it.

To Vince Perry – who literally jumped in a cab at midnight, made the driver gun it over to mine, came in and literally picked me off the floor with my stuff and into a cab back to his house – where I stayed in the early days. My deepest thanks. Actions speak louder than words. And I wont forget.

To Kasia and Helen – who opened their beds (thoughts clean children!) and talents to me. For the relentless mutual pursuit of improvement and the willingness to put their clits on the block when it came time to piss or get off the pot – thanks, honey’s. Helen, I owe you a nice Thai dinner (to begin with!), Kasia – I owe you a Tattoo studio session in Japan when we’re next there on business 😉 I got you, sister. Thank you!

To *** – who taught me about the value of discretion, who ongoingly mentors me and was willing to strike a deal because you saw something when I had nothing. That was all I needed to press on. Thank you!

To Bec – for everything. There exists a no more compassionate and giving person. Thank you!

To Lani – the support in my corner. A safe retreat away from the world, and a soothing bath. It wont be forgotten.

To Trent – for capturing the early stages. Here’s to our ongoing friendship. *Cheers*

My early reports to you, future followers, are that I have a business venture coming up in the next 2 weeks, I am in the process of signing with a modelling agency, I am apparently soon to be featured on the cover of a men’s magazine, and I have 1 job bar tending at a famous Melbourne gay bar, 1 job topless waiting at a Male strip club, and 2 jobs nude modelling for arts students around Melbourne. What a month.

I look forward to the next chapter 😉

Follow The Way of The Gentle Man on WordPress.com